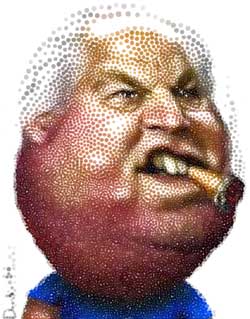 Rush and The Angry Mobile Mob

Today, Tuesday, March 13th, 2012, brings the Mobile Web into sharp focus. I know, I know, a bunch of people still use feature phones and when you mention “Mobile” to them they immediately think about the “Hoveround” or the “mobile Library” they may have seen stalking neighborhoods not fortunate enough to have their own library buildings.

Not so for Rush Limbaugh. Talk show personality who loves to watch “Sluts and Prostitutes” on video while doing oxycontin. He said it, I’m just repeating his words.

If this despicable piece of homo sapien doesn’t know about the mobile web, he’ll soon find out. Rest assured, Premier Radio Networks know all about the power of the Mobile Web. They distribute Limbaugh’s show and they are being inundated by an astonishing number of mobile requests to pull his show.

I would like you to read the short article in its entirety and decide for yourself. Is the Mobile Web a fad as some still claim?

Just a decade ago, Rush could have made those statements almost with impunity. And he has made similar statements. As a public figure, he should have done the research. Today, whether someone listens to his show, (basically those that idolizes him), or not, his incendiary comments are instantly available to every and anyone with a mobile device. Never mind the fact that CNN will also broadcast it on their network around the world.

This story and its outcome should serve as a wake-up call to all amateur and professional “soapbox” instigators alike. You are no longer insulated from the backlash. By way of the “Mobile Web”, the entire planet now has access to your rantings, AND, more importantly, they can do something about it.