This is just something I came across. If you are a Local Business owner are involved in local search, you are well advised to investigate this.

Sean D’Souza, a Kiwi marketer and owner of the website Psychotactics.com, or why customers buy (and why they don’t), is doing something unheard of in the marketing world.

He’s about to GIVE AWAY one of his best-selling courses, and there’s a very good reason why he’s doing so. No, it’s not because it’s outdated, being replaced or any other marketing ploy. 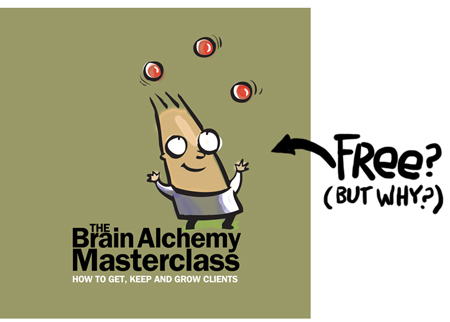 It sounds unusual: Why would someone just give valuable information away?

You and I know that “normal” people don’t do this kind of stuff. No one just gives away thousands of dollars worth of stuff without some sneaky up-sell, cross-sell or some kind of catch. To give away valuable information just like that, sounds weird at the very least.

But we’re not normal (our logo should give you enough hints).

My long-term goal is to create a university in New Zealand (Casa LocoLoco: The Mad House)

This university will be in place to help folks like you run their businesses. It will be a non-profit university. In the spirit of Casa LocoLoco, I am slowly going to make most Psychotactics products and workshops free by the year 2020. So as you can see this process is thoughtful; it’s methodical. And it’s designed on the fact that generosity helps us all.

And the Brain Alchemy Masterclass is just the beginning.

The only ‘catch’ if you want to call it that, is that you have to opt-in.

Read article here: How To Get, Keep And Grow Local Search Customers.

So, usually, when the word FREE is attached to almost anything, a certain stigma comes with it. The assumption is that the material or product is outdated, being replaced, worthless or what ever.

You may fall into that trap if you want, but I’ll say this, just a short while ago, if you wanted access to this course you would have had to pay $2800 USD for it!

Are you looking for new Local Customers? Are you involved in search marketing? Maybe you just want to learn how others are getting and keeping new customers? Do yourself a favor. Sign up for the course!

We’ve just outlined why anyone in business should be paying attention to this important statistic. Prospects have long since abandoned looking in Yellow Pages and now are turning from their computers at home to their mobile devices in their hands for answers.

Google first reported back in March, 2010 that more than one half of their mobile queries showed local intent, now it’s Bing’s turn to report on this growing trend. Here’s the article in full.

Half of searches done on mobile have local intent

ORLANDO, FL – A Bing executive at CTIA Wireless 2011 revealed that 50 percent of search queries on mobile have a local intent with users searching for restaurants, movies and other forms of entertainment closest to them.

During the “Mobile Search – Finding the Right Answer” session, panelists discussed mobile search and how it has been talked about for years. However, in the era of Smartphones, app stores and rich-media browsers, it’s a whole new game.

“The way that we think about search is that historically, it’s all about the Web,” said Andy Chu, director of product management for Bing at Microsoft, Seattle. “Where search is going in general, in mobile, is how we can help consumers complete tasks.

“That’s the whole motion,” he said. “Search on mobile goes beyond the topical Web and links.”

The panel was moderated by Derek Kerton, principal analyst at The Kerton Group, San Francisco.

Mobile search
Universal search is being featured front and center because with so much content available, a single search needs to bring back the consumer’s contact information, media and information from the Web.

“We’re going to see much more deeper integration with search,” Mr. Chu said. “Search is all about speed.

“Also, besides the voice features, you can use the camera function to search,” he said.

According to Mr. Chu, many Bing users are searching for places near their current location, as well as for entertainment such as movie tickets.

The company noticed a spike that begins on Wednesday – for restaurants, entertainment and bars – and goes into Saturday.

All about privacy
According to Anil Panguluri, director of mobile search at Yahoo, San Francisco, there is a desire for privacy.

Additionally, there is a huge difference in terms of how people perceive privacy when categorizing by country.

“It depends on whether the technology in place can capture the signals,” Mr. Panguluri said. “It’s about how we detect the signals.

“There’s a lot of unknowns with privacy and with detecting users and using all the information that we can gather,” he said.

“The concept was formed with the difference of using a feature phone back in the day when the Motorola RAZR was the coolest phone on the market,” Mr. Panguluri said. “There was no way to display sites the way that they should look.

“We thought why not show those results in a nice way,” he said. “That’s how we built the one-search product.

“It was successful and it gave answers and not links. It’s still very applicable today.”

In addition, Mr. Panguluri said that there are obvious differences between Web and mobile searches.

Being able to identify users on the Internet is difficult because they are not logging into search.

“They just go in and search, so you don’t know who the user is,” Mr. Panguluri said. “You just see what they’re browsing and their cookies.

“On mobile, users are constantly logging in whether it’s Facebook or Twitter,” he said. “On mobile you have a chance to have a deeper experience and that involves a lot of social features.

Daren Gill, vice president and general manager of vTap at Veveo, Boston, said that there should be a universal search.

“We think that we should be helping users do more and browse less,” he said.

Still on the fence about the direction mobile is taking marketing? Maybe it’s time you explored the field a bit more. Start here at our homepage: Local Mobile Search Marketers.